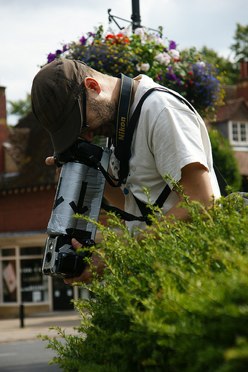 Photo of me by Tim Ellis

My name is Pete Ashton and I take photographs using a lens made out of a vintage Duaflex camera. This technique is popularly known as Through the Viewfinder, or TTV.

I took my first TTV photo in August 2006 and have, at time of writing, posted 1,800 TTV photos to Flickr. What started as a novelty has become a form of photography I find both restricting (in a positive sense) and liberating.

I am, of course, indebted to many others for helping me along the way. Stu Parker (aka harri-b) first introduced me to the technique and has been both a peer and a mentor. And the very existence of the Through the Viewfinder Flickr group has been invaluable, not least the administrative efforts of Russ Morris in keeping it a good and useful place. The members of the TTV group have been inspirational and intend to highlight my favourite photographers on this blog. After all, studying their work is part of my process.

During 2010 I sold prints of my work at markets and in shops in Birmingham. While I intend to continue this I’m spending 2011 thinking more about galleries and art projects. I’ve tried to explain the shift in this post.

I’m based in Birmingham, UK and have been an active blogger and photographer for many years. I started the Birmingham Flickrmeets in 2006 and the arts blog Created in Birmingham in 2007. Alongside the photography and art I offer my services in website building, Internet consultancy, content production and public speaking under the ASH-10 banner.