This weekend I finished my latest in a number of riffs on Alvin Lucier’s I Am Sitting In A Room. This latest, reposting the same image over and over to Instagram, achieved a lot of what I’ve been searching for lately so it feels like good point to stop and take stock of who else has been using “the room” as a method of exploring iterative decay and its effects.

Patrick Liddell: I Am Sitting In A Video Room

Guy Evans: Out Of Space 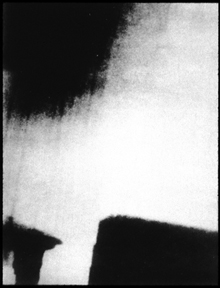 “Between 1969 and 1974 Mary Lucier made a series of slide projection works titled Polaroid Image Series, begun as a collaboration with the composer Alvin Lucier and based on the structure of his composition for voice and tape, I am sitting in a room. In this sound work, Alvin Lucier recorded himself reading a text describing the making of the work. The recording was played back into the room repeatedly, rerecorded each time, until the original statement became unintelligible as a representational form, leaving only the resonant frequencies of the room and the rhythm of speech. Following the same structure, Mary Lucier introduced an original Polaroid photograph through a Polaroid copier, thus beginning a sequence of 50 images in which each subsequent generation becomes itself a copy of the one before it. As in Alvin Lucier’s sound work, small errors that occurred during the process were incorporated into the work and amplified as it progressed. The resulting 50 black and white slides were projected sequentially, along with the original thirteen-minute audio work.”

Charles Calloway: I Am Instagramming In A Room

Sebastian Tomczak: I Am Sitting In A Room (MacSpeech and TextEdit Version)

Antonio Roberts: I Am Sitting In A Room

Let me know by email or in the comments.