Like many people interested in new ways of making images using computers, I’ve been playing about with Inceptionism or Deep Dreams. If you’d like to have a go I found this is the best tutorial to get you set up.

I’ll write soon about what I think it all means, and why I think it’s much more interesting that puppyslugs and weirdness, but for now here’s some of the images I’ve been growing.

I had a couple of crystallising moments recently where something I read contextualised everything I’ve been thinking about over the last few years in an incredibly useful way. The first was Vilém Flusser’s book Towards a Philosophy of Photography which came up during a talk by James George at Resonate this year. He’d recommended it to his friend Alexander Porter who found it a revelation, completely changing his view of photography. I figured I needed to read it too.

It’s good, and made a lot of sense, but the crystals that emerged were still small. I knew there was something there but I couldn’t quite articulate it, or turn it into a working practice of my own. Then Alexander pointed to an article about Flusser by Kenneth Goldsmith (the keeper of UbuWeb and someone who’s been on my radar for a while) called It’s a Mistake to Mistake Content for Content which is so much better than the cleverclever semantic title suggests. Here’s a key bit:

Suddenly the crystals were huge, so big it was a little bewildering. I told Jenny about this and she seemed surprised it was such a big deal as surely I’d been thinking about this for years, but that was sort of the point. I had been, but I hadn’t fully realised it. This is what really interested me about “social media” before it became impossible to work in that area thanks to marketeers and other eejits. And this is everything than interests me about photography in the 21st century, about how context, and the lack therefore, is essential to understanding the power of an image, and how that context is deeply embedded in the systems that enable it.

(I should also add that I don’t agree with all of Goldsmith’s statements, especially those where he appears to impose a value judgement, but that’s fine. It’s his perception that has value here, not his conclusions.)

So this is the flag in the ground for the first stage of working with these ideas in a more deliberate way. Here is my plan.

I want to keep things simple. Diving in an unpicking the myriad systems that inform a photo on Instagram is insane, though I hope to get there eventually. As Goldsmith says, the best way to interrogate these systems is “to break the system by doing something with the camera that was never intended by industry.” To hack it, in other words. So I’ll be looking for where that happens, particularly emergent community hacks rather than those make a political or artistic point. Alongside this is finding glitches in the systems themselves and examining those. The little moments where the ideology of a system bumps into the technical or commercial reality and causes us to raise an eyebrow.

Systems, of course, are all around us, so I’ll just be looking at those directly related to the creation, distribution and consumption of photographic images and writing a bit about them on this blog.

And, finally, I’ll be ignoring the value or otherwise of the visual content in the images themselves. I’ve been collecting vernacular photographs from Instagram for a while now and it’s become a dead-end. The images are not the thing - it’s the context, and I threw that away. Idiot.

Cross City Walks will be open to the public on Friday 28th through to Sunday 30th March from 3pm to 8pm. Details here.

Here’s some photos from the build on Thursday. 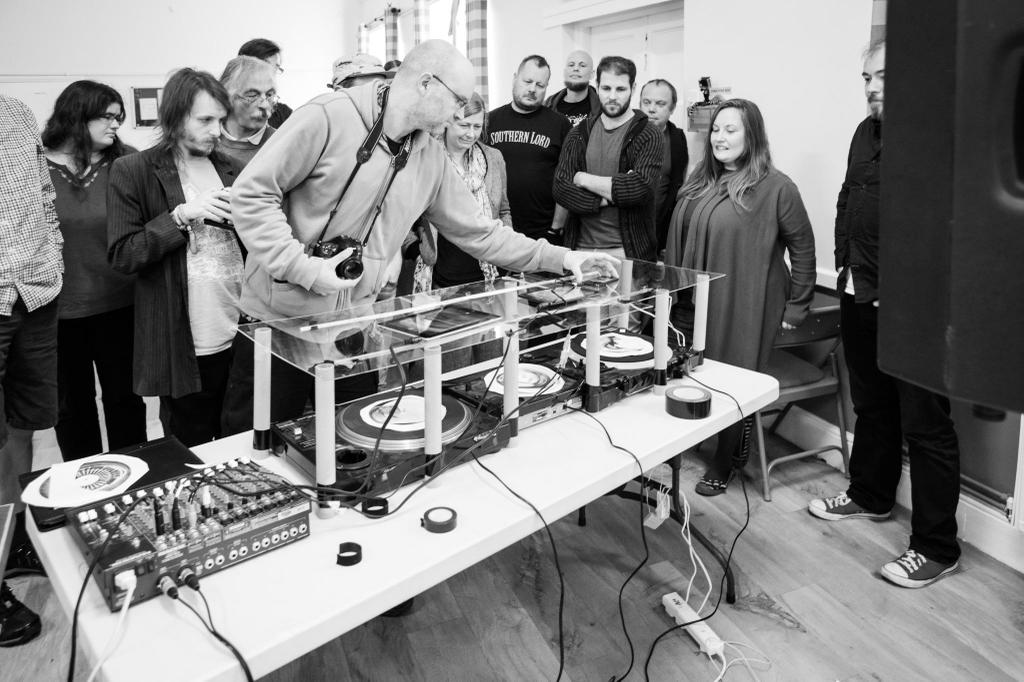 On Sunday I was one of the artists presenting their work at If Wet, a salon-style gathering of sound artists and experimental musicians in a village hall in deepest Worcestershire. This was the culmination of a year or so’s work exploring slit-scan photography, performance photography, sonification of images and many other disparate things that I’ve been able to bring together through the framework of “being an artist”. You would not believe the freedom that gives you.

It’s also the start of something and is very much at the prototyping stage. One of the purposes of presenting at If Wet was to put a call out for collaborators who would like to work with the sounds I’m producing to make something nice, or at least interesting, out of them. I’m very aware that it currently sounds like a sonogram but, as I say repeatedly, I am not a musician and this is way out of my comfort zone. Collaboration is the way forward.

Some images made during the presentation 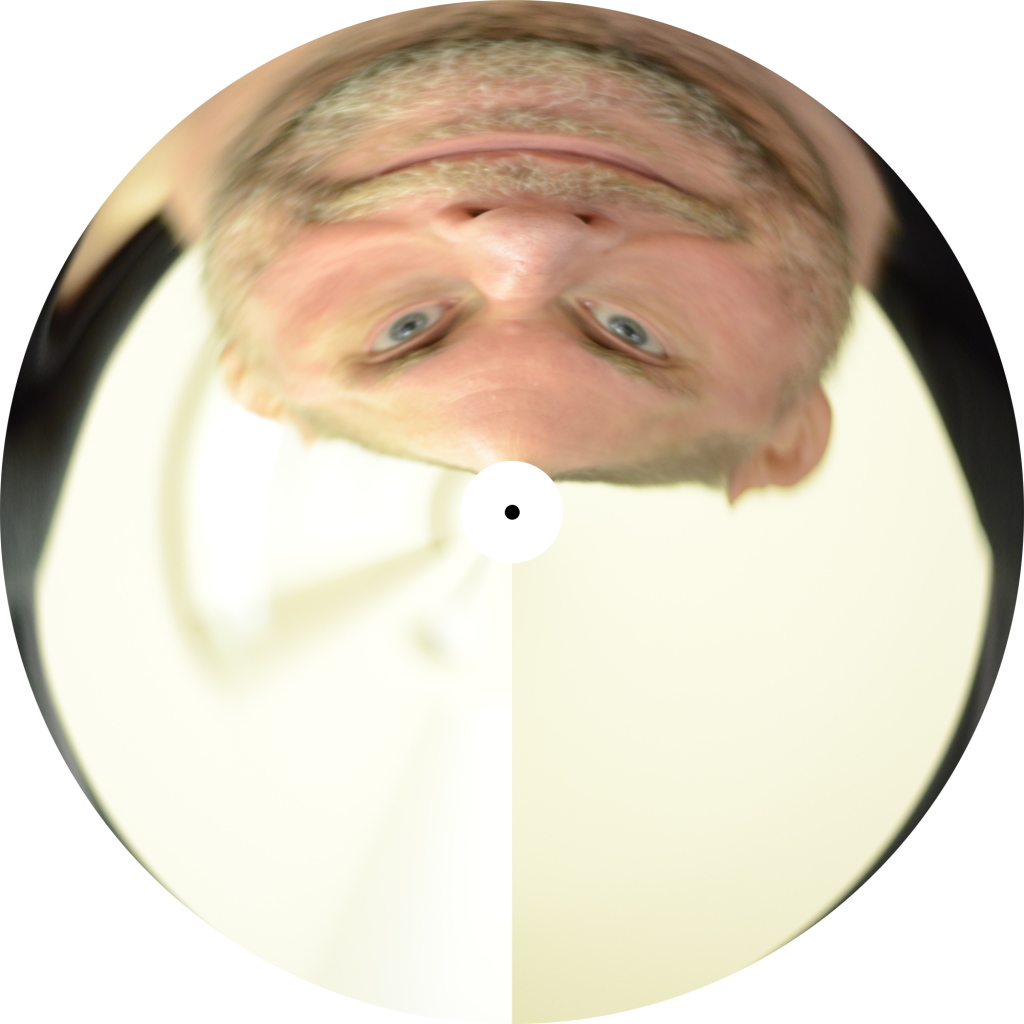 Somewhat annoyingly I won’t have any time to develop this over the next 6-9 months because the Camera Obscura project is stepping up a gear very shortly, but I hope to come back to it in the autumn of 2015 and am really interested in finding a collaborator along the way. In the meanwhile I hope it’s inspiring and enjoyable!

Pic at top by George Benson

More photos on the If Wet blog. 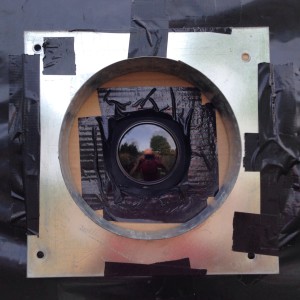 For the forthcoming Birmingham Architecture Festival, on May 24th Jenny Duffin and I will be wheeling a large camera obscura around Birmingham city centre which people can view the city through. It’s something we’ve been talking about doing for a few months and it’s actually going to happen. We just need to build it.

The project is, at this stage, completely self funded. We did tout the idea around a bit but nobody seemed interested in paying us to build a giant mobile camera, and understandably since we had nothing except an idea and a very bad sketch. So we shrunk the budget, lowered the expectations, and built a 1 meter cube on stilts, stuck a sheet of tracing paper over the bottom, covered it in blackout plastic and fixed a lens at the top.

It’s surprisingly hard to photograph it since it’s really just a black box. Here are some production photos, after which I’ll talk a bit more about the process. It was a very iterative process. I realised, not for the first time, that my diagrams might show how something should look but failed miserably to show how they might work. I am not an engineer and my respect for engineers grows with every attempt to build something.

The original plan was to have the viewer lie on the floor under the box and look at the image projected onto the screen. While this rear-projection idea is interesting it didn’t prove that practical, especially for testing the focus, so we cut a slit in the top next to the lens to look into the box itself. With an old parka hood for lightproofing this turned out to be much better, so we’re probably sticking with that.

The other issue was the 45 degree mirror. I sourced cheap acrylic mirror tiles on eBay but the image refused to focus. A visitor suggested it might work with a proper mirror, so I grabbed the bathroom one. It worked much better, though Fi won’t let me use it as it’s apparently a nice mirror. But in the process we started liking the simplicity of just pointing the lens at the subject on its own, so we might get rid of the mirror altogether. Except I just bought an £8 glass mirror from the mighty Latifs and it works, so we’ll see.

A final unexpected issue was the focal point. All the literature about lens-based camera obscuras talks about the lens focussing on the screen at a particular distance inversely proportional to its diopter (our +1 diopter lens focusses at a metre, a +4 diopter (similar to most cheap magnifying glasses, it seems) focusses at 25cm) but none of it talks about where the focal point of the subject itself might be.

It turns out our lens has a focal point of 20 metres, give or take. This might explain why all the camera obscura I’ve seen are a long way away from their subjects, up towers or on cliffs. Anything too close with fall out of focus very fast. This might be an issue when we’re wheeling this thing around at ground level. Or it could just be a feature!

But we’re happy with the current iteration - a box with a lens and a screen which creates an image people can look at. Here are a couple of photos taken by resting my iphone inside the camera. It’s not accurate (high ISO noise and long exposure blur) but it proves it works. To do:
- Get some wheels and make it mobile.
- Devise an adjustable fixing for the new mirror.
- Create side banners saying “Duffin and Ashton’s Superlative Camera Obscura” in a Victorian sideshow style so it looks a little less like a big square binbag. Any offers? Can pay with pizza and beer.

The box will be roaming around Birmingham City Centre pointing at key buildings on Saturday May 24th as part of the Birmingham Architecture Festival - check their Twitter for locations on the day.

More details to come, along with our long term plans for this project, of which we have many…